Who will win this year’s Eurovision Song Contest? According to the bookmakers, the Dutch entry, Duncan Laurence, stands a good chance! But who is this relatively unknown singer-songwriter? And what is his sensitive song Arcade actually about? We looked it up for you!

Duncan Laurence (born as Duncan de Moor) is a singer-songwriter who graduated from the Rock Academy in Tilburg, The Netherlands in 2017. He has been involved in music throughout his whole life and has been writing songs since he was 14 years old. After graduating from the academy, Duncan started coaching vocal talents.

The Netherlands got to know Duncan while he was on The Voice of Holland, where he made it to the semi-finals in 2014. He was coached by Ilse DeLange, who came 2nd on the Eurovision Song Contest with her band, The Common Linnets, that same year.

It was also Ilse who suggested Duncan to the Dutch Eurovision selection board. When they heard Arcade, they were so impressed that they unanimously voted for him!

But what’s the story behind Arcade? In a press release Duncan explained the song’s message stating:

“I found inspiration in the story of someone who was close to me. Somebody who – at just 40 years old – passed away. She didn’t have children of her own, so in a way I think that I was the son she never had. Her death had a huge impact on me: it was my first big loss and it still is.

It inspired me to write the song that I called ‘Arcade’ – the words and chords came, as it appeared to me, straight from the heart.”

This resulted in these open, vulnerable lyrics:

Duncan’s dear friend never stopped being in love with her husband, despite the fact that he left her:

Ooh, ooh
All I know, all I know
Loving you is a losing game

In the final chorus, Duncan refers to a penny slot; a slot machine in a casino where coins are inserted to gamble with. In this chorus he compares the love of his dear friend to a bet that she ultimately loses; Loving you is a losing game.

There’s also another message hidden in Arcade, which Duncan explains:

“The song also expresses the feeling I had when I moved from the village I grew up in to Tilburg: the small-town boy in the big city. In love with everything that was going on, but I also felt lonely sometimes. At the same time though, it was my own decision – a strange mix of emotions, that did bring me something positive in the end.”

Arcade may be a heavy song, but Duncan aims to inspire people with its message.

“With ‘Arcade’, I managed to get advice for myself from the life story of someone I cared for; a life lesson: you make your own happiness. Although that isn’t always easy.”

He has won the hearts of bookmakers as well as many Dutchies with this sensitive song, and in May he will try to conquer the rest of Europe at the Eurovision Song Contest. Good luck Duncan! We give you douze points!

*The interview referenced here was provided by Duncan Laurence’s management. 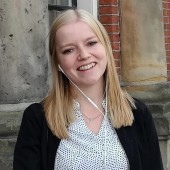 “Music plays a big role in my life; I often listen to my Spotify playlists and I love to see my favorite artists live. After my masters in Applied Social Psychology I now have a gap year to find out what my next step will be. When I have a day off, I love to meet up with friends and bake delicious sweets. I love listening to mainstream pop music, artists like Gavin DeGraw, Ariana Grande, Sam Smith and Bruno Mars are often on replay!”