If you’re surprised that a Korean superstar is performing at the Ziggo Dome tomorrow you shouldn’t be. G-Dragon, who’s sold out entire stadiums worldwide, has collaborated with a myriad of artists including Justin Bieber, Diplo, Skrillex, Missy Elliott, and M.I.A.. He’s appeared in Vogue, Dazed and ID in less than a year (so let’s not forget him here on Nolala 😉). The singer has written and produced 22 hits in Asia, but if you’re not convinced of his cool just yet, you can find him hanging out in the spotlight with Chanel’s Karl Lagerfeld.

G-Dragon, whose real name is Kwon Ji-yong, is a Korean idol who is also part of the K-pop band, BigBang. K-pop is a phenomenon, which literally means ‘Korean pop’ because it originates from Korea. Karaoke bars, cafes and shops in Seoul all compete for your attention by blasting K-pop onto the streets. I spent a semester living in the capital of South-Korea and it was hard not to hear at least one of G-Dragon’s songs every day. The band’s popularity in Asia can be compared to that of One Direction in the west, while G-Dragon’s fame is much like Kanye West.

The guy is on fire and will be performing in the Ziggo Dome tomorrow as a part of his second solo world tour, Act III: M.O.T.T.E (Moment Of Truth The End). In Korea, 40 000 tickets for the tour’s show sold out in less than 10 minutes, and the concert in Japan was live streamed in 100 theatres. G-Dragon can be a little crazy and has an interesting personality on and off-stage. Just in case you’re not familiar with him, here are the Top 5 songs that reveal who G-Dragon really is by introducing you to a few of his major hits.

Let’s get this party started! Get your crayon! Wait… Cray-on, crayon…? Get your cray on. As in Ni**gas in Paris‘ that shit cray? That’s cray-zay. This song isn’t actually about colouring is it?

Let’s find out! The chorus of Crayon is almost completely in English:

After some online research, it turns out that the lyrics really are a play on words. ‘Crayon’ is shortened from ‘Crazy On’, which derives from combining ‘Crazy’ with ‘G-Dragon’.

G-Dragon seems to have this mind-set as well: “I am usually positive and optimistic, I don’t worry a lot and I’m not too serious about anything. I want to have freedom with everything I do.”

We’ll take that as a good thing.

This song sounds almost like the Korean version of Turn Down For What by DJ Snake and Lil Jon. Instead, G-Dragon sings I am a Good Boy in a sultry voice that makes you think he’s anything but. Could these lyrics be trying to say something along those lines? Let’s ask Google to translate the lyrics:

During the day, lil hamster but,
When you love at night gangster
Tasteful eyes (natural skin ship)
You’ll be scared
Tell me what you want
I do not need to know

Kwon Ji-yong could be the good boy during the day, but while he’s performing he’s G-Dragon, the ‘night gangster’. According to the online music platform, HelloAsia, G-Dragon is a type of alter-ego of the singer Kwon Ji-yong, who is much more of an introvert. Apparently, the image G-Dragon has as Korea’s bad boy is very different from the actual person.

As the song clarifies a little more about G-Dragon’s personality, this song is a deserved #4 on the list.

This song was the height of 2015 in Seoul. Whether you were walking down a shopping street, on your way to class or hanging out in a bar, Bang Bang Bang by BigBang was going off.

This song is the exact style which Vogue described G-Dragon as having “part pop, hip-hop, and EDM, with the occasional interspersing of English words.” For me, this song was impossible to Karaoke to, but my Korean friend could sing it to the point that I thought he’d stopped breathing.

I’ll take you away right now
When the red sky dances
We’re spinning and spinning, you and I, this place is Valhalla
Give praise and spread it out louder

We go hard, we’re the night’s watchmen, run all night with space magic
This song is the apex, it’s so fun, sing about the wonder
Loud screams are devilish melodies, the connection to a black poison
All around you, get high and release the reins whoo
Bang Bang Bang – BigBang

A combination of the tune and lyrics of Bang Bang Bang make the ultimate song to party and rebel to. The song could go down in history for how it’s been used. The South-Korean government officially blasted Bang Bang Bang over the North Korean border in response to the country’s nuclear tests in 2016. With the the salient detail that listening to K-Pop can actually lead to you being executed in North-Korea.

University students also sang the song during protests that led to their president being impeached.

Bang Bang Bang! Take that! With BigBang, G-Dragon is a party, protest – powerhouse.

G-Dragon isn’t all about letting loose though. Back in 2015, BigBang brought out Bae Bae. With this song, G-Dragon sings about the selfishness of love. In an interview, G-DRAGON said, “I expressed men’s selfish desire for his girlfriend not to grow old from the age of 25, when a woman is the most beautiful in her entire life”. The singer is quite brave for his honesty. Maybe 25 is around the time a woman starts to age gracefully.

Your eyes are pretty like a deer
My princess
When you laugh at me it’s so chic
Are you crazy?
You’re a natural beauty, so unique, so unique
My perfect dear
Be my muse
We’re so comfortable together, I’m gaining so much weight
My body wraps around yours so perfectly
You’re forever 25 to me
Won’t ever change BABE 5 X 5 BABE

But why does G-Dragon think 25 is the perfect age when it comes to love? “The age of 25 seems to be the right age for a man and woman to have the most passionate love in their lives. I expressed a situation in which the man and woman promise that their love will never change,” G-Dragon said.

Cool as he may be, G-Dragon describes having good chemistry as follows:

Chemistry like ‘chapssaltteok’, a sticky rice cake. A this is not only very Asian, but also pretty damn cute.

Up until now, the singer has been best known as G-Dragon but his latest album has become more personal which is where you’ll find the Top 1 of this list, Act III Super Star. Recently, G-Dragon has been going by his birth-name ‘Kwon Ji-yong’, which is also the name of the album.

The album starts off in the usual crayon/crazy G-Dragon style, but halfway through it seems to take a turn with Act III Super Star. This song seems to describe exactly who Kwon Ji-yong is at this stage in his career.

Act III Super Star begins with describing the life he has built up, which seems to be symbols of his success.

I need some,
Things that I want in my life now
I own so many things
But I have so much more to lose
I need some,
A big house, super car, money, honor, girls
Yeah, a ghetto super star
Being able to build my own home, my own fortune
The art that fills the walls of my room
The galleria in my home
In the Seoul garden, my garden
Feel free to visit comfortably

The first half of the album seems to be performed by G-Dragon, and halfway through Act III I feel as if the album’s persona switches to the man behind the whole act.

The luxuries he has don’t seem to alleviate Kwon Ji-yong’s loneliness:

I need some
Friends who are the same age as me,
Instead pour my own glass and drink by myself
I work; producing songs and filming lined-up commercials
I tour the world
I need some
I know, your words are right
I’m full, yes, I’m tired, I am
Act III Superstar – G-Dragon

At the end of the world tour premiere in Seoul he told the audience “I hope you will stay by me no matter who I am—the humble Kwon Ji-yong or the glamorous G-Dragon.” Ah.. even to a K-pop phenomenon like G-Dragon it’s scary to open up.

Who do you like better? G-Dragon or Kwon Ji-yong? Decide this for yourself, tomorrow during the Act III: M.O.T.T.E World Tour performance in the Ziggo Dome! Tickets are still available!

*Disclaimer: After 5 months in South-Korea, my Korean language skills are terrible. Do you have a better translation of the lyrics, or know exactly what they’re about? Let us know!

Did you like this article? Then you’ll probably also enjoy What is the music of BTS actually about? 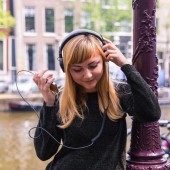